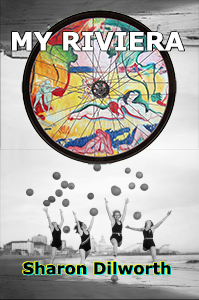 My Riviera, by Sharon Dilworth

Suddenly exiled from Paris by her father, fifteen-year old Agnes finds herself living in the south of France with her sister Sophie, her ailing grandfather and two servants in the family’s long-neglected summer villa.  Without any friends, they begin exploring the Rivera as a means of distracting themselves from the mysterious scandal that has sent their family south. It is against the postwar backdrop of the Côte d'Azur where they meet Jules Agard, a self-described man of leisure who shares his two burning passions with Agnes: the brilliant artist Henri Matisse, who is completing his chapel at Vence, and Fausto Coppi, the great Italian cyclist who is the only man to have won both the Tour d’France and the Giro di Lombardia in the same year. It is a confusing place for Agnes to come of age:  the beauty of the ocean and the clarity of the light are no match for the opaque intrigues that swirl around her life.

SHARON DILWORTH is the author of two collections of short stories, The Long White and Women Drinking Benedictine and a novel, Year of the Ginko.  She is the recipient of the Iowa Award in Short Fiction a National Endowment for the Arts Grant, and Pennsylvania Council on the Arts Grant as well as a Pushcart Prize in Fiction.  A professor of English at Carnegie Mellon University, she is the director of the creative writing program, and has also served as the fiction editor at Autumn House Press.


Advance Praise for Dilworth's My Riviera

“It was a pleasure to sink into MY RIVIERA, a novel immersed in beauty and charm in a ruined villa in the south of France. Sharon Dilworth brings together a nostalgic setting and a family mystery during a magical year in the lives of two sisters who discover they have much to learn about life and love and most of all, about each other.”
— Elizabeth McKenzie, author of The Portable Veblen

“A breathless coming-of-age story set in Nice, France post World War II where the Pernod is cold and the beaches are hot with expectation. Love is elusive and young and desperate in Dilworth’s homage to a time when family loyalties never wavered no matter what the cost.”
— Michele Lowe, winner of the Francesca Prize for Inana

“Sharon Dilworth’s writing is animated and sympathetic, wry and aware. Her characters are vivid and unpredictable. She is able to convey a sense of life lived in time and place with great immediacy. The readers senses a complete world in the control of the author’s sensibility; it is this, I think that establishes the excellence of her work.”
— Robert Stone on Dilworth’s THE LONG WHITE

“Though Rubik’s Cubes are no longer a national obsession, those colorful puzzles may keep coming to mind as you’re reading Sharon Dilworth’s second short-story collection, WOMEN DRINKING BENEDICTINE. Her fiction is just as intricate: whenever one person moves, another is dislodged, and the pattern of the narrative grows more elaborate with each turn. But while someone struggling with a Rubik’s Cube tries to twist everything back into alignment, Dilworth delights in doing the opposite. Characters initially arranged along familiar axes—husband and wife, mother and daughter, boyfriend and girlfriend—soon find themselves on unfamiliar ground. ”
— Liam Callanan, New York Times

“YEAR OF THE GINKO confirms that Sharon Dilworth is a remarkably talented writer. She has a keen eye for detail, an effortless, understated style, and an instinct for revealing these uncomfortable dark truths simmering away below polite suburban surfaces.”
— Rodge Glass, Somerset Maugham Award Winner, 2009